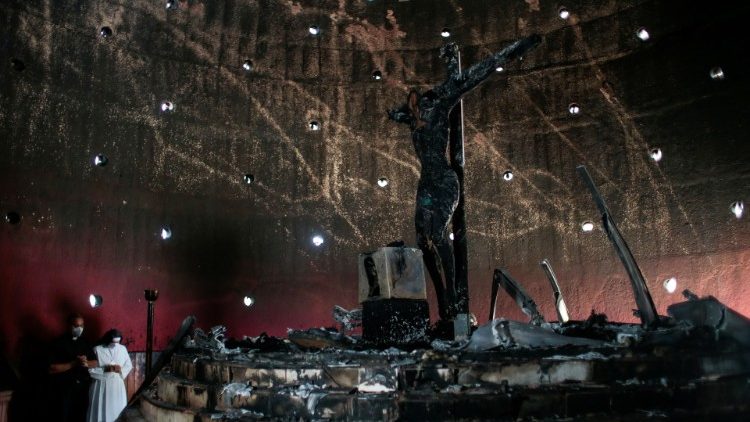 Cardinal Leopoldo José Brenes, Archbishop of Managua, has described an attack on the city’s Catholic cathedral as “an act of terrorism”.

Witnesses say a hooded man entered the Chapel of the Blood of Christ on Friday and threw a Molotov cocktail.

The petrol bomb started a fire that engulfed a 400-year-old crucifix housed in the chapel.

The blaze was brought under control fairly quickly, and no one was injured.

But the attack has left a deep wound on Nicaragua’s Catholic community.

The Archdiocese of Managua released a statement on Friday, calling the attack a “premeditated and planned act, carried out by someone with experience in this field.”

The crucifix was completely destroyed in the fire, which the statement says was “in no way accidental, since there were no candles nearby.”

This was a “deplorable act” which “offends and deeply wounds” all Catholics because the damaged crucifix was “one of the most loved and venerated by the faithful of Nicaragua.”

Hatred of the Church

The Archdiocese said the attack is just the most recent “in a series of sacrilegious acts, violations of Church property, and attacks on churches.”

These events are “nothing more than a chain of events that reflect hatred of the Catholic Church and her work of evangelization. The attacks against the Catholic faith require in-depth analysis, to clarify the intellectual and material authors of this macabre and sacrilegious act.”

Finally, the statement urges Catholics to respond with faith “to the feeling of pain and helplessness we are suffering.”

Anti-Catholic violence on the rise

Vandalism and attacks against Catholic churches in Nicaragua have seen an uptick recently.

Consecrated Hosts have been desecrated. Monstrances, offerings boxes, and statues have been destroyed. Stereo equipment and other Church property have been stolen.

The situation represents a growing climate of violence and intimidation against Catholics.

Pope St John Paul II once paused in prayer at the foot of the now-destroyed Managua crucifix, and uttered words of encouragement to Nicaragua’s Catholics.

During his visit to the cathedral in February 1996, the Pope told those present:

“You desired this church at the heart of the Archdiocese of Managua – in which you devotedly venerate the image of the ‘Blood of Christ’ which arrived from Spain more than three centuries ago and which represents Jesus offering His blood and His humanity to the Father on the cross – to be dominated by the Risen Lord in the sign of His victory over sin and death. Do not forget the mystery of death and resurrection when the fatigue, loneliness, or incomprehension of others seeks to diminish your enthusiasm or make your spirit waver. Do not doubt that you are loved by the Lord, and that His love always precedes and accompanies you. His victory serves as a guarantee of ours!”